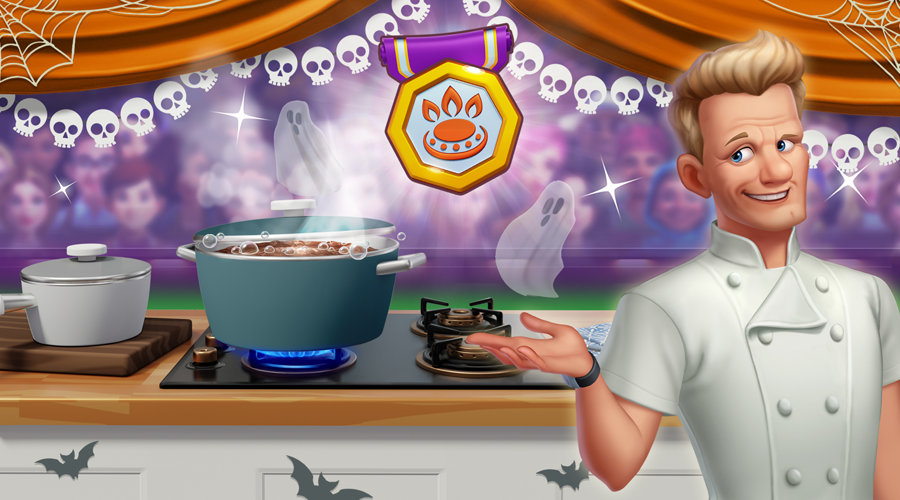 Available now, the Halloween update will run until November 3rd. Players will have access to several ghoulish events, including the return of Baking Bingo, The Hot Stove League & Market Day, all given a suitable Halloween makeover, offering fun and alternative ways to earn coins and win exclusive in-game prizes. The popular Team Trophy Tournament also returns with an autumn-appropriate makeover, giving the opportunity for players to work in teams to collect trophies and win some sweet rewards.

New kitchen decoration items, including a bat decal and pumpkin candelabra, can be won by taking part in the Baking Bingo event. Additional items, such as a witch’s hat, broom, cauldron and jar of eyeballs will also be available as bonuses for first-time purchases.

Players can also blast their way through levels this month for the chance to get their hands on two recipes to inspire them to put on a fearsome feast at home. An exclusive recipe for Black Cocoa Donuts will be available for players with a sweet tooth, plus the return of the hair-raising Halloween favourite, Crispy Ravens Wings with Bloody Hell Sauce.

Richard Hare, President of Outplay Entertainment, said: “The Halloween update to Gordon Ramsay’s Chef Blast is full of creepy and ghoulish additions, with a brand new recipe for players to sink their teeth into. Adding these in-game events to Chef Blast will help our players get into the Halloween spirit, with numerous spooky additions at their fingertips.”

And if scares and thrills aren’t enough for you, players in the US, UK and Canada still have the opportunity to enter a competition to win an all-expenses paid trip to Las Vegas, including a restaurant experience. One lucky player will win a dream stay at Caesars Palace, and dining experience at any of Gordon Ramsay’s five Las Vegas restaurants. To be in with a chance of winning, players must defeat 10 levels in the game and enter before the competition closes on October 21st. Full terms and conditions can be found here.

Gordon Ramsay’s Chef Blast is Outplay Entertainment’s acclaimed title featuring the Culinary Genius™ himself. Released in January 2021, already downloaded 4.75m+ times and nominated for best puzzle game at the TIGA Games Awards 2022, players can blast their way through the puzzle game by tapping and matching cubes to win levels and unlock some of Gordon’s most impressive recipes.

Gordon Ramsay’s Chef Blast is free and available to download now on iOS and Android: