JOIN POIROT IN AGATHA CHRISTIE’S DEATH ON THE NILE, COMING TO MOBILE FOR THE FIRST TIME 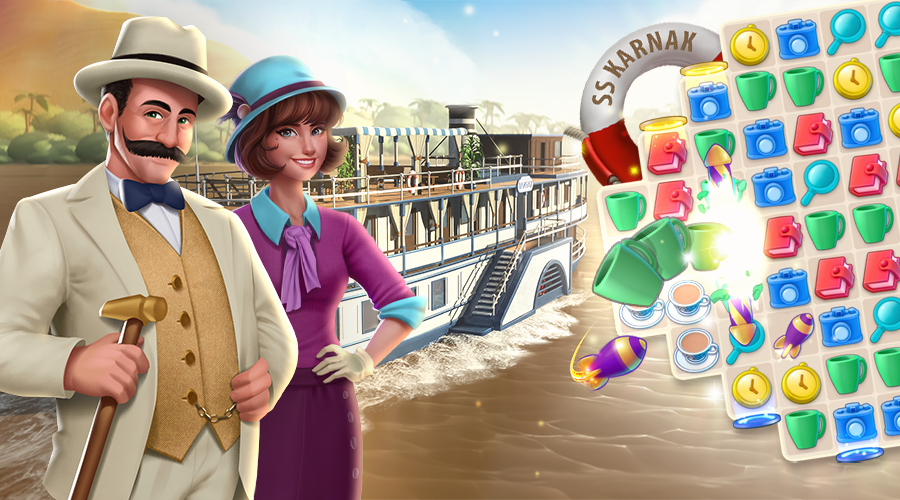 Channel your inner Poirot for this Death on the Nile update to Outplay Entertainment’s Mystery Match Village, the innovative match-3 puzzle game for iOS and Android

DUNDEE, SCOTLAND – November 9, 2021 – Outplay Entertainment, the largest independent mobile game developer in the UK, has partnered with Agatha Christie Ltd to bring Death on the Nile to the world of mobile gaming for the very first time.

The partnership will see Death on the Nile reimagined on mobile, with Outplay Entertainment and Agatha Christie Ltd working closely together to strike the perfect balance between flexibility in adaptation, whilst maintaining the authenticity of an Agatha Christie experience. Readers’ favourite characters and locations from Death on the Nile have been specially designed and animated in a brand-new way, fitting the established style of Mystery Match Village, making the experience perfect for Poirot and puzzle fans alike.

Launching on November 11th, the Death on the Nile event will give players the opportunity to step into the role of a lifetime, and for the first time ever play alongside the iconic detective, Hercule Poirot. Players will assist Poirot as he leads the investigation, sharing his suspicions and insights with you as you work together to uncover the truth in Agatha Christie’s classic murder mystery.

In this brand-new adaptation of Agatha Christie’s classic, players will journey to 1930s Egypt aboard the S.S. Karnak and help unravel the classic murder mystery under the Belgian detective’s expert tutelage. By completing levels, players will earn Poirot Points to unlock cinematic and narrative scenes, in-game boosts and rewards, and exclusive exotic world decorations. The game is a brand-new way for fans to experience the character of Poirot and enjoy the story of Death on the Nile, right at their fingertips.

James Pritchard, CEO of Agatha Christie Ltd, said: “Death on the Nile is one of my great-grandmother’s most celebrated works, and we’re pleased to see our partnership with Outplay Entertainment bring the story to life on mobile. We collaborated closely with Outplay Entertainment from early on to ensure the game reflected the essence of the characters and the story. Fans of Agatha Christie love a puzzle, so what better way to tell the story than by giving them the opportunity to work directly with Poirot and solve the mystery themselves.”

Douglas Hare, CEO of Outplay Entertainment, said: “We’re delighted to announce the Death on the Nile update for Mystery Match Village, and our partnership with Agatha Christie Ltd. It’s an honour to bring one of the Queen of Crime’s most coveted novels to mobile for the first time. The team has been working exceptionally hard to recreate these famous characters as faithfully as possible, and we’re excited to share what we’ve made.”

Mystery Match Village is Outplay Entertainment’s acclaimed title that takes players on an adventure alongside bubbly private investigator Emma Fairfax, as you catch criminals, solve varied match-3 puzzles and hidden object challenges, and restore the beautiful English village of Kingsfall to its former glory. Each episode of Mystery Match Village introduces a unique case to be solved with new characters, locations, and puzzles, with mysteries of looted family heirlooms, unsolved murders and unexplained happenings among the cases players can enjoy.

Mystery Match Village has also been nominated within the TIGA Games Awards 2021 for the diversity of its characters and development team.

Mystery Match Village is free and available to download now on iOS and Android: