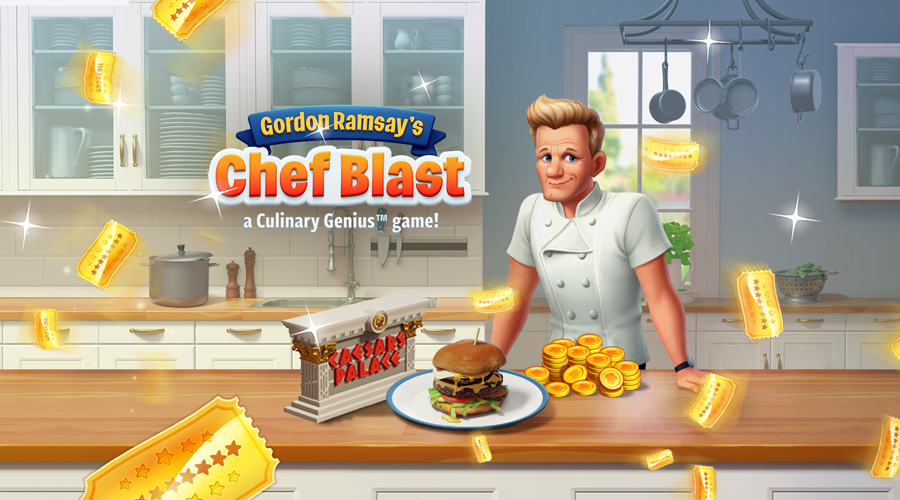 Players that defeat 10 levels in Gordon Ramsay: Chef Blast can enter the competition for the chance to win an all-expenses paid trip to Las Vegas, including restaurant experience

Outplay Entertainment has partnered with Gordon Ramsay to set a new challenge for players of its culinary mobile puzzle game, Gordon Ramsay: Chef Blast, to win an all-expenses paid trip to Las Vegas and restaurant experience.

For the chance of winning the free-to-enter competition, starting at 00.01am BST on October 21st, players must defeat 10 levels in the game and enter before the competition closes on November 18th.

The competition prize includes free flights, accommodation in a premium suite at Caesar’s Palace and an exclusive dining experience at any of Gordon Ramsay’s five Las Vegas restaurants, including Gordon Ramsay Hell’s Kitchen or Gordon Ramsay Pub & Grill, during their stay. The competition is open to players in the US, Canada and UK and the winner will be notified by November 25th. Full terms and conditions can be found here: http://chefblast.promo/

During the competition period, players will also receive a spooky update with the kitchen decorated for Halloween, and the chance to win an exclusive in-game recipe of Raven’s Wings with Bloody Hell Sauce created by Ramsay himself.

Outplay Entertainment’s last in-game competition for Gordon Ramsay: Chef Blast took place between 9th and 16th September, with influencer teams competing against each other for victory. In addition to receiving in-game bonuses of coins and boosts, Tiffy Cooks, the winning influencer, will be immortalised in-game with her own custom avatar, available for players to use from October 21st.

Gordon Ramsay: Chef Blast is Outplay Entertainment’s acclaimed title featuring the Culinary Genius™ himself. Released in January 2021, players can blast their way through the puzzle game by tapping and matching cubes to win levels and unlock some of Gordon’s most impressive recipes.

Gordon Ramsay: Chef Blast is free and available to download now on iOS and Android: